What Would You “Mount Rushmore” Of TV/Movie Cars Look Like?

If Mount Rushmore had cars on them instead of presents, what cars from TV/Movies would make it up there?

News topics included the answer to a simple Tik Tok math problem that is stumping everyone, man said he though police wanted to drag race him, woman decides to change babys name after she realized her nickname would be lasagna, and a California woman got back at porch pirates by putting cat poop in the box.

What’s Your Best Excuse To Get Out Of A Ticket?

A man was pulled over in Elkhart County for going 120 in a 70 and leading the police on a 25 mile chase. His excuse? He thought police wanted to drag race. What’s your best excuse for getting pulled over?

Subscribe to The Morning After On Demand on Apple Podcasts, Google Play, Spotify or wherever you find podcasts. 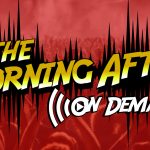